Rigoberta Menchú and I

This is part biography, part book review and homage to one of the greatest human rights activists who remains largely unheard-of. Rigoberta Menchú is more than an activist; she is the embodiment of the struggles of millions of indigenous people in Latin America. In all honestly, I have only known of her since the summer of 2011 when I came across the book titled “I, Rigoberta Menchú” at a used bookstore in Austin. If you have an interest in indigenous rights, Latin America, women’s issues in the rural setting, or just human rights, I recommend you read it too.

Rigoberta Menchú was born in 1959 in Chimel, a small town in the central Guatemalan province of Quiché. The area of land that is now known as Guatemala has been home to indigenous tribes (some 25 of them) for centuries, although today only 40 percent of the Guatemalan population is pure indigenous. Rigoberta belongs to the Quiché people, who have lived in the highlands of Guatemala since before the Spanish conquistadors arrived, and who to this day maintain their culture and language. She grew up in a rural peasant family, who at that time were at the mercy of ruthless landowners. They were forced to work on farms owned by Mestizos (people of mixed heritage) who kept a strong hold on the country through government support and militiamen.

The land provided sustenance to the rural families for generations, and when this was snatched from them, they began to lose control of the outcome of their lives. They were in effect slaves. The country of Guatemala was formed on their backs – their toil fed the rich, while families such as Rigoberta’s were forced to go hungry, sometimes reverting to eating grass. With no access to healthcare, the infant mortality rate soared; a child reaching his/her fifth birthday was seen as a miracle and the event celebrated by the entire village. 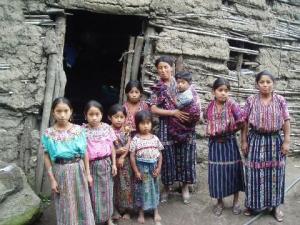 On the backdrop of the civil war, Rigoberta’s family was decimated. Because the Menchú family was active in the land reform movement and grass-roots activities such as women’s groups, they were suspected of being subversives by the local government. Her brother was captured and her family was forced to watch as he was burned alive in a village square. After her father was arrested and tortured, most of the family, including 20 year old Rigoberta, joined the local rebel organization, the CUC (Committee of the Peasant Union). Her father Vicente was a leader of a small band of rebels who captured the Spanish Embassy in protest of government policies: security forces were sent in and most of the rebels, including Vicente, were killed. Her mother was likewise arrested, raped, and killed. By 1981 Rigoberta was a marked woman: she fled Guatemala for Mexico and from there to France.

In France, Rigoberta met Elizabeth Burgos-Debray, a Venezuelan-French anthropologist and activist. Burgos-Debray convinced Rigoberta to tell her compelling story and these interviews became the basis for I, Rigoberta Menchú, a ghost-written autobiography. The book alternates between the beautiful scenery of Guatemala that is home to such colorful indigenous cultures, and harrowing accounts of war, torture and rape. The book is very personal and the reader turns every page with the feeling that the words are being secretively whispered. It is not a revolutionary book, just the growing up story of girl amidst incredible cruelty and hardship. It is not a story of survival or triumph, but a retelling of life as it was for millions.

I, Rigoberta Menchú was quickly an incredible success and was translated to several languages. Rigoberta was surprised that people took an interest in her story, but she used her newfound fame to good effect – organizing protests and conferences around the world and championing indigenous rights. In 1992, Rigoberta Menchú was awarded the Nobel Peace Prize in recognition of her work for social justice and ethno-cultural reconciliation based on respect for the rights of indigenous people. The day she was awarded the prize accidentally happened to be the 500th anniversary of Columbus’ famous voyage which set off in motion a chain of events including the conquistadors, colonization, epidemics of diseases, loss of culture, language, religion, and the rape/pillage of the Americas (the “new world”). Rigoberta remains to this day, a strong voice for indigenous people around the world who are still struggling to ascertain their rights.

Centuries have passed since Columbus first set foot, and decades have passed since Rigoberta’s childhood in the Guatemalan highlands. Indigenous tribes are still oppressed, still in a battle for their land. I have had a chance to work with several indigenous tribes in Panama, Mexico and Honduras. In every tribe I have found a loss of culture and the indigenous way of life. People have now discovered on their land – oil, heavy metals and opportunities for power generation through water, wind, etc. Rigoberta’s work is very much relevant today, and I urge you to read her book and do what you can to support indigenous rights around the world.

In Between Politics and Humanitarian Agendas: UNRWA and Palestinian Statehood

The Zaatari Refugee camp in Jordan, and the plight of the Syrian people